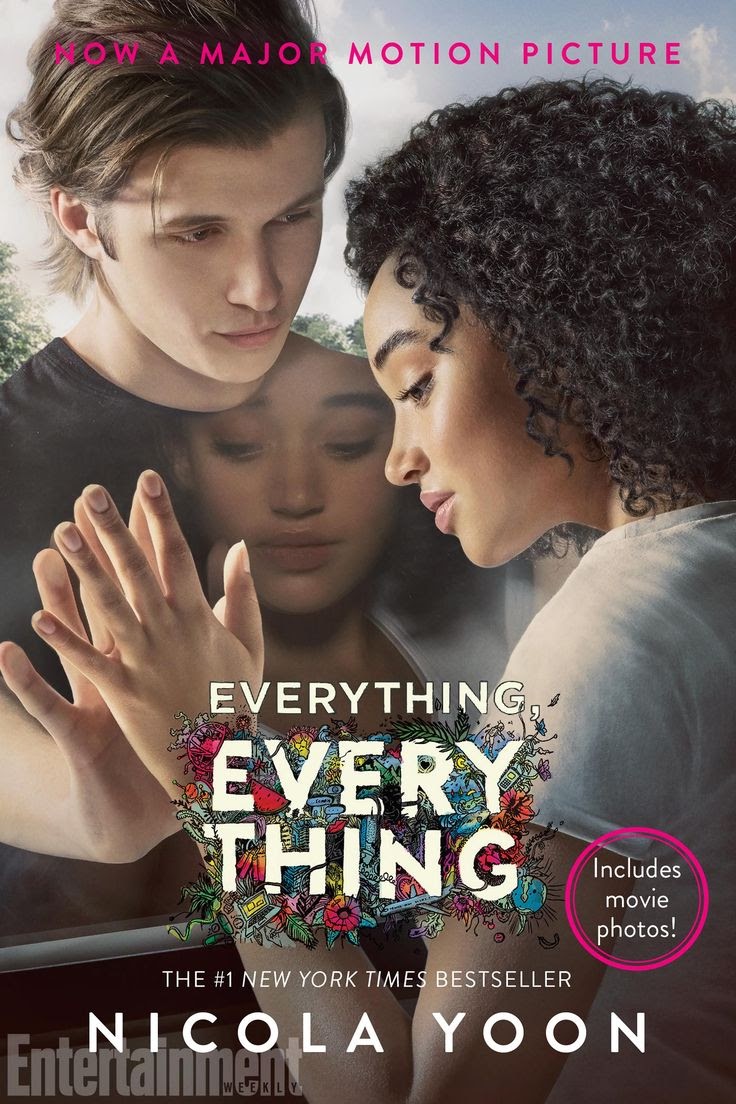 This discussion will have spoilers for both the book and the movie!
If you want to read a spoiler free review of the book Everything Everything by: Nicola Yoon, click here!
Find this book on Goodreads here!

Overall thoughts on the Book:
Overall we really enjoyed this book. The way Nicola Yoon wrote it is so creative! It felt like we were reading Maddy’s journal, and getting to know her on a deeper level. We both feel like if she were just telling her story in the “traditional” way, we wouldn’t have loved Maddy as much as we do. So props to Nicola Yoon!! Oh my gosh Olly!! ❤ ❤ He is everything! However, we both feel like we needed more of him. Even though this is is Maddy’s story, it would have been nice to see a bit more into Olly’s world.We got a small glimpse into his world by seeing his father’s relationship with the family, but would have been happy to read more. We both would be here for a retelling of this book from Olly’s perspective.
Problems we had with the book:
Overall thoughts on the movie:
Going into this movie we had a lot of expectations and a lot of them had to do with problems we have with the book. Overall, we enjoyed the movie but we feet that the movie expands the problems we found in the book rather than reduces them. We both really enjoyed Amadla Steinberg as Maddy, and Nick Robinson as Olly. Their chemistry is very evident and they bring the relationship between the characters to life beautifully. We thought it was really creative how the movie brings the conversations between Maddy and Olly to life,  by having them set in Maddy’s architectural models. We also enjoyed the ending more in the movie. We feel that the movie gives more closure between Maddy and Olly than in the book. We like that Maddy apologizes to Olly for ignoring him after they left Hawa and that they decided to start over with each other.
Problems we had with the movie:
Thanks for taking the time out to read our review! We’d love to know your opinions on this book! Feel free to share and sound off in the comments!